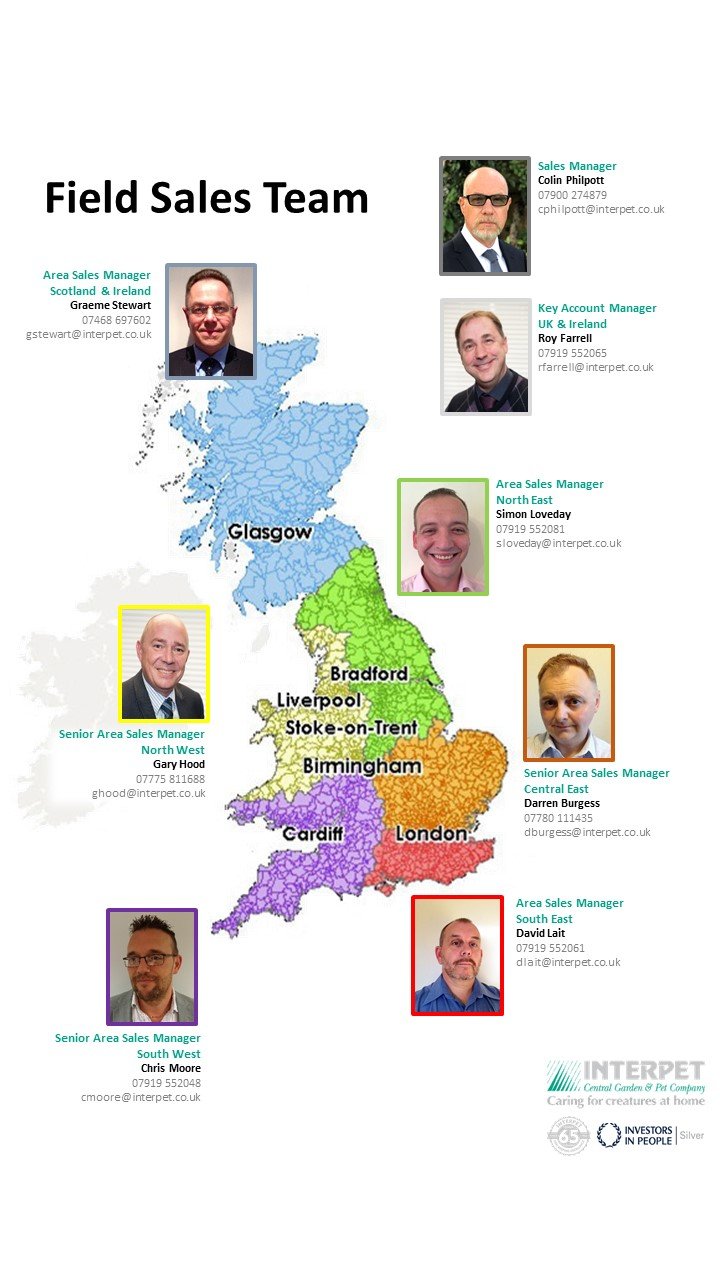 Colin Philpott: Has been with Interpet for over 12 years, in a number of posts including Wholesale manager and Sales manager. He has worked within the Pet industry for 40 years, previously with Selfridges Aquatics, Spillers Petfoods and Nestle Purina. Colin has experience in many key business practices including team management, merchandising, retailing, finance, marketing and sales. He has a passion for all pets and pet welfare and has been a fish keeper for many years.

Roy Farrell: Has been with Interpet since 2010, currently Key Account Manager supporting the Wholesale Network and national retailers. He has worked within the Pet industry for 30 years, previously with Pet Retailers Jollyes, Pet City, PetsMart and Pets at Home. Roy has experience in many key business practices including Customer service, retailing, merchandising, finance, marketing and sales. He has a passion for all pets and pet welfare. Roy has two dogs, a Springer and a Westie (Mollie and Oscar) and has been a Aquatic fish and Pond keeper for many years.

Gary Hood has been with Interpet for over 15 years and in this time has carried out many roles within the business. Before joining Interpet he worked within the Pet Industry in both Retail Management and for a Dog Food manufacturer giving him strong knowledge of the retail trade and also a great understanding of merchandising. In all he has over 22 years’ experience of the trade, so has seen the trade evolve! Gary has a passion for working dogs and has 2 English Springer Spaniels, one of which is trained to work in the field.

Graeme Stewart: Has been with Interpet for over 4 years as Area Sales Manager servicing pet outlets in Scotland, Ireland and Isle of Man. He has worked within the Pet Industry for 26 years, previously with Rolf. C. Hagen and Mars Fishcare. Graeme has worked in the grocery market with Cadbury and has experience in merchandising as well as sales. He has a strong interest in all pets and particularly enjoys walking the family dogs.

Darren Burgess: Has been back with Interpet for over 5 years originally starting with the company in 1997 as a Sales Representative and working his way up to a Regional Sales Manager with a number of representatives working under him in the South East region before trying something different in 2007 working for a large aquatic wholesaler. Darren returned to the business in 2014 and now looks after the South East region as well overseeing 2 Area Sales Managers, one in Scotland and one in Kent. He has a keen interest in all animals as well as being an experienced fishkeeper and dog owner for many years.

Chris Moore: Has been with Interpet for over 10 years and has worked within the direct to business sales industry for over 25 years.  Chris prides himself on his integrity and willingness to help. Chris is also a serial pet owner and has never been without a dog.  His current best friends are his Yorkie, Lilly, feisty Chihuahua, Poppy and the boss! Rosie, a twelve-year-old tabby.

Simon Loveday has been with Interpet for 5 years and has been in the pet/aquatic trade for 8years, previously within the wholesale channel. He is experienced in merchandising, retail and sales. He has a Labrador puppy which is testing the puppy range of Nylabone.

David Lait has been an Area Sales Manager for 23 years in the garden retail industry, but only been with Interpet since September 2019. After so long selling garden sundries, he wanted a change of scene and a new challenge. He has a long-held interest in merchandising and stock layouts, as well as the planning and organising of trade stands at shows such as GLEE. He is a great animal lover, but especially a “cat person”. David owns a black cat, keeping up a family tradition of over 50 years. He is also a member of Cat Protection, The Born Free Foundation, Marine Conservation Society and a number of other animal charities.